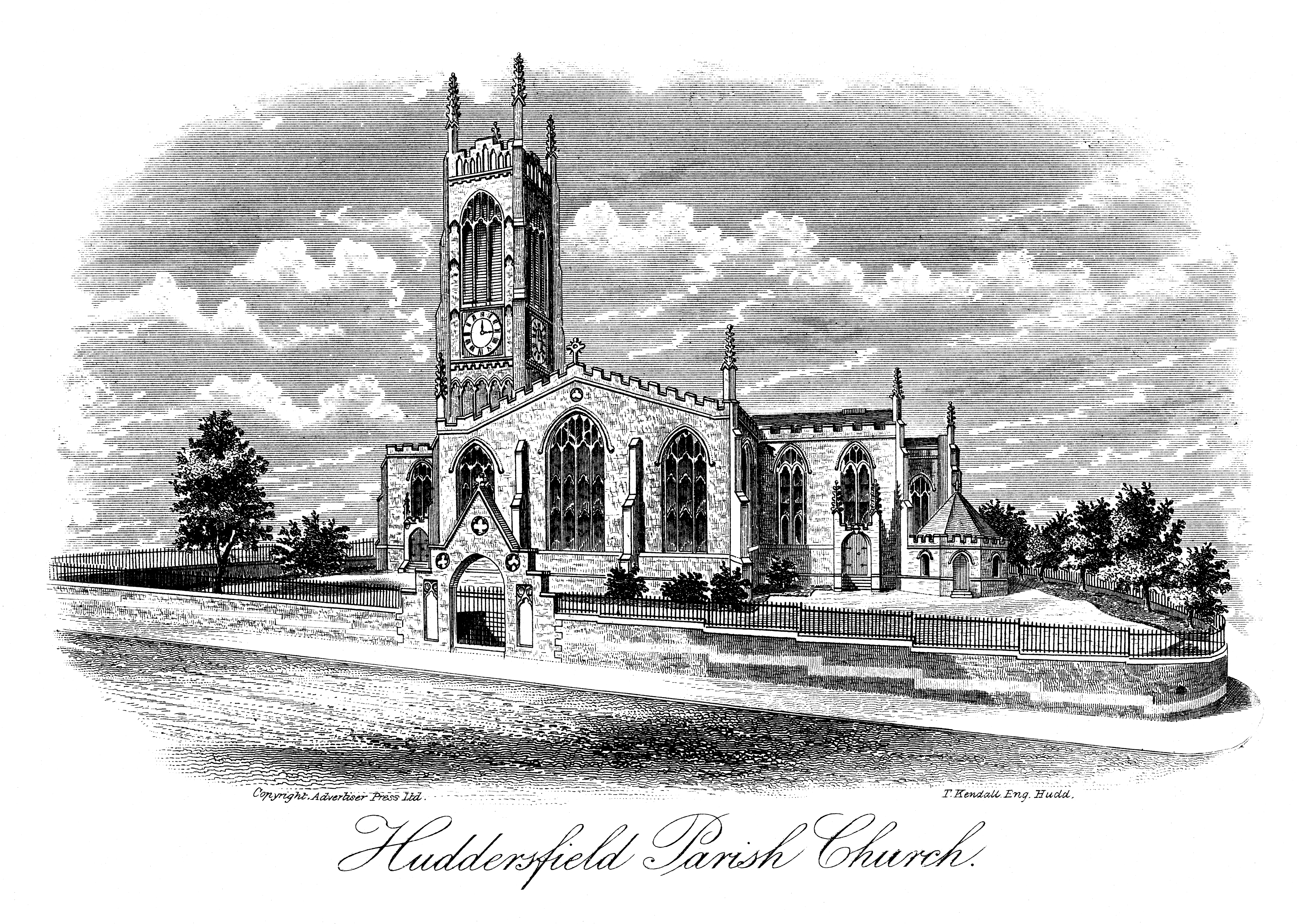 Constructed in ashlar with a pitched slate roof, it has nave and aisles flanking a west tower, south transept, and a lower one-bay chancel flanked by one-storey polygonal vestries.

The chancel is shallow, with a single plain pointed arch window to each side. The east end has a large 5-light window with perpendicular tracery and a crenellated transom above a semi-basement shouldered arch door flanked by small pointed arch windows. The nave has a crenellated parapet and chamfered dado throughout, with shallow buttresses, diagonal at the corners and with crocketed pinnacles. The north side has 8 windows with 2-centred heads, plain chamfers, Perpendicular tracery, and hoodmoulds, in pairs divided by buttresses. All are 2-light with one transom, except at the west end where the window is without a transom and is over a former door, now blocked, which has buttresses to either side and C20 simple tracery over the blocking. The south side has a broad transept, a gabled roof with a cross finial at the head, and diagonal corner buttresses with crocketed finials. Two buttresses also divide the 3 windows, the central one with 4 lights and 2 transoms, flanked by a 3 light to each side. The remaining nave windows are as on the north side, but at the west end is a door, similar to that on the north side but still in use, and access to the crypt. At the east end is another similar door, approached up a flight of steps, and between are small arched windows at ground level, lighting the crypt.

The west end has a tower over the west entrance, with 6 stages, Perpendicular traceried panelling all over, 3-light louvred bell openings, diagonal buttresses with crocketed pinnacles, and openwork traceried crenellations. There are clocks on each side. Below is a triple-arched doorway with a 3-light window with tracery and one transom over. At the east end on either side of the chancel is an octagonal vestry. The northern has a crenellated parapet, flower finial on the pyramidal roof, a north door and simple pointed arch windows with hood moulds. The southern, also with crenellated parapet and a south door, has traceried windows with decorative hood moulds with carved label stops in the form of faces, including Jesus, Mary, a former bishop of Ripon and Benjamin Disraeli.

The main entry is through the west door which leads to an entrance lobby beneath the tower. A small arched door leads to a spiral staircase accessing the tower. Further doors to each side lead to the gallery, that to the left removed. An arched double door leads into the nave, at the rear of which is a cleared narthex area with bench pews beyond. The rear two rows (wardens' seats) have tall blind traceried backs and shouldered ends, possibly reused from an earlier building or from elsewhere. The aisles are defined by open arches with octagonal columns which support the galleries, also supported on transverse beams with panelled traceried decoration. The timber roof has tie beam and king post trusses infilled with traceried panels and large bosses. The font, to the right at the rear of the nave, is dated 1570 and has the cipher ER and the arms of England and France quartered, crudely inscribed. To the rear left is an inserted kitchen where the second stair to the gallery used to be. The Lady Chapel, in the wide, shallow south transept, has wooden furniture and a carved parclose screen to the nave, which is also a Second World War memorial, all by Robert Thompson of Kilburn.

A low platform has been extended into the east end of the nave, containing an altar by Robert Thompson, and a polygonal timber pulpit with linenfold panelling and a wrought iron balustrade to the steps. To the left is the organ, a Conacher of 1908, restored by Philip Wood in 1984. The chancel contains carved choir pews with ogee-shaped crocketted ends with poppy-head finials that may pre-date the C19 church. In the sanctuary is a gilded timber baldachino by Sir Ninian Comper (1921) with 4 Tuscan columns, entablature and angels on the top carrying swords made from candles, designed as a First World War memorial. The east window has stained glass also by Comper. Other stained glass in the church is mainly from 1834-6 with some of 1852 by Willement.

Various neo-classical marble tablets are on the walls of the aisles, including one to the Rev Henry Venn, Vicar 1759-71, whose zealous ministry did much to combat non-conformity in the town. The best is in the south gallery near the north end, to Robert Brook and has a broken column, a sarcophagus, and an aedicule with diagonally placed consoles.

The galleries have carved wood-panelled fronts and box pews on three sides. Those at the centre rear are later and are fronted with carved panels clearly reused from elsewhere, in similar style to other reused carved timber. Above the south transept is a cleared area used for meetings.

The north vestry is wood panelled and contains cupboards and a small toilet within the walls. The pyramidal roof has narrow exposed beams radiating from the apex. The south (choir) vestry is larger, with exposed stonework around the windows and door, and a panelled ceiling. The crypt area contains offices and a restaurant open to the public. The ceilings are vaulted.

A number of C17 tomb slabs, mainly those of the Brookes of New House Hall, are used as paving outside the west end. St Peter's Gardens to the north, formerly the churchyard, also contain tombs and monuments. A stone arched entrance on the south side is a later addition.

The first church of St Peter's dated to the eleventh or twelfth century. It was rebuilt at the beginning of the sixteenth century and again in 1834-6 when the previous church had fallen into disrepair. It was designed by J P Pritchett of York, a leading non-confomist chapel builder, and what was initially intended to be a straight rebuilding became more ambitious, involving the construction of a crypt, the extension of the nave by 30 ft and the raising of the tower to 120 ft. Some items from the earlier church were incorporated. Two octagonal vestries were added at the east end, the northern by 1851 and the southern, a choir vestry, in 1879. The interior was reordered in 1873 with the renewal of pews and a new pulpit. In 1923 the Sanctuary was reordered, and a baldachino and east window by Sir Ninian Compton installed as a War Memorial. The south transept was redesigned in the 1940s with an oak screen by Robert Thompson as a Second World War Memorial. Further internal reordering took place in the 1980s, with a dais installed in the body of the church and a Robert Thompson altar.

The Church of St. Peter is designated at Grade II* for the following principal reasons:

The stonework of St Peters has given trouble ever since it was built, with significant flaking of the outer surface. Over the years several attempts have been made to solve the problem from chemical treatments to complete re-facing of areas of stone work but have had limited success. Many believe the problem was caused by a mistake made by the builder Mr. Exley who reused much of the stone from the earlier church building and depending on which account you believe is thought to have relaid the stone with the natural bed running vertically rather than horizontally which would cause moisture to gather in the stone or that he had the former inner-face of the stone re-dressed to form the new outer face of the building, being exposed to the elements so long after being cut from the quarry the stone could no longer develop a hard protective surface layer to protect it from weathering.